Welcome to the website of conceptual artist and photographer, Debilynn Fendley. 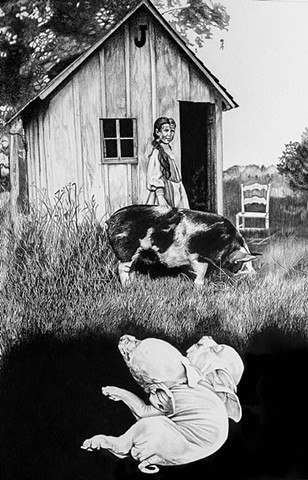 Debilynn Fendley works within cultural subgroups to produce both documentary and conceptual realism pieces in photography, printmaking, drawing, and painting. As a visual storyteller, she pushes the boundaries between fantasy and reality and strives to make work that crosses boundaries between subgroups and mainstream norms. Of her work, Steve Anchell, author of The Darkroom Cookbook and contributor to multiple major photography magazines, writes, “[H]er background as an artist working with subcultures and people living on the margin places her in the same league as the great photodocumentarians, Donna Ferrato and Susan Meiselas; perhaps even the great photographer of the dispossesed, Diane Arbus.” DebiLynn holds advanced degrees in art and English and a terminal MFA in Interdisciplinary Art from Goddard College. She is a founding member of and active exhibitor with the Arkansas Society of Printmakers and holds membership in the Southern Graphics Council, Professional Photographers of America, and the Hot Springs Art & Film Institute. She has been published in multiple national publications on photography, printmaking, and painting, including works from North Light Books, and recently completed her first IMBd credit as still photographer on the film Ride Hard, Live Free. DebiLynn currently serves with the Hot Springs Arts and Film Institute as an educator, exhibition curator, film judge, and photography festival producer.